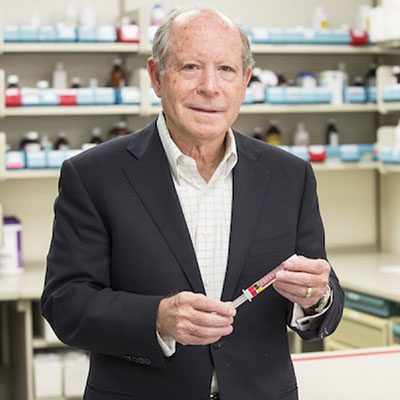 Passion is the word that best captures David Jonas’s essence.  His passion for life, Israel, family and friends was unmatched.  It was the key ingredient in his success.  When he took something on, he took it on with all the passion in the world.  He infused his passion equally between his philanthropic initiatives and his business affairs.  In fact, he approached both in a very similar manner.  Throughout his entire professional career he was always involved in not-for-profit, philanthropic activities.  Whether it be promoting trade between Israel and the United States by founding the AIBEX initiative in partnership with the American Israel Chamber of Commerce or actively supporting numerous organizations, including ELNET, Foundation For Defense of Democracies (FDD), StandwithUs, Stand Strong, Friends of the Israel Defense Forces (FIDF), and countless others until his very last breath.  His passion was infectious and often provided people and organizations with the push or the momentum required to reach their goals.

David’s story represents everything that is right in this world.  He is an example that if you have the drive and work ethic, you can accomplish anything.  He came from modest means and had to figure it all out on his own.  No one mapped it out for him or took him under their wing to carve the path for him.  He had to prove himself and earn every step on his own merit.

He was born on a kibbutz called Maoz Haim in the Jordan Valley, just a hop, skip and a roll away from the Israeli/Jordanian border.  After serving four years in the Israel Defense Forces and a formative year in London, David landed in Dekalb, IL to attend Northern Illinois University.  All he had were two suitcases.  From there he found his way to Chicago, where he attended Roosevelt University.  He worked his way through college, including at the Blommer Chocolate Factory.  He never expected any handouts and was simply grateful to have a job.

David eventually pursued a career at Baxter International, a blue chip, blue blood company where he started as a controller of its Travenol subsidiary in Israel.  After a stint as an assistant plant manager in Baxter’s largest manufacturing facility in Marion, North Carolina, David eventually became the General Manager of Travenol.  Under his leadership, Travenol consistently topped the performance rankings in Baxter’s International division.  David continued to advance within Baxter to become the Vice President of Worldwide Corporate Development.  In this role, David lead and executed countless investments, joint ventures, and divestitures.  In his last role at Baxter, David co-founded a wholly-owned subsidiary Renal Therapy Services (RTS).  RTS owned and operated hundreds of dialysis clinics all over the world.  David orchestrated the acquisition and integration of all of these dialysis clinics.

Most people would have finished off their career at a company like that and retire with a nice pension.  That in and of itself would have been an amazing accomplishment for anyone, let alone someone who came to Chicago from Israel not knowing a soul and just a couple of suitcases in hand.

After selling PharMEDium, David focused his attention on JVC Investment Partners (JVC), through which he amassed a vast portfolio ranging from cattle ranching to cellular therapy biotech companies.  Through JVC, David looked to partner with entrepreneurs, innovators and businesses in their quest to realize their full potential.  JVC’s portfolio companies all benefited from David’s vast experience as an entrepreneur and a corporate executive.

In addition to his passion for business, David placed family above all.  He was married for 47 years when his wife Etta passed away from cancer.  He lived within minutes from each of his three children and nine grandchildren with whom he frequently visited and traveled.  David is sorely missed, but his legacy lives on through JVC, Elm Family Foundation, his children and grandchildren.